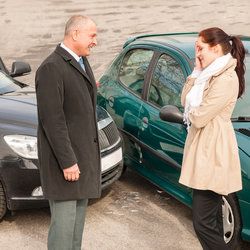 Anyone who’s driven in New York City could probably tell you that it’s an acquired skill that is unlike driving anywhere else. Inexperienced drivers could easily find themselves holding up traffic, stuck in the wrong lane, or colliding with nearby vehicles or, worse yet, pedestrians. But not even native New Yorkers and experienced drivers are completely immune from the potential dangers of city driving.

Before turning on your car’s ignition, it’s a good idea to be aware of the potential for an auto accident. Take the following statistics on New York auto accidents into consideration so that you can drive defensively and safely, whether you’re in the city or elsewhere in the state.

First, the state of New York deserves recognition for its relatively low rate of traffic deaths. As of 2010, the state averaged 6.19 traffic deaths per 100,000 residents, compared with the national average of 10.67. This distinguished New York as the third safest state in regard to fatal accidents. However, one must also remember that New York comprises a high population, so even with this low rate, the year’s accidents resulted in 1,200 fatalities.

Since 2008, the number of auto accidents and traffic-related fatalities had been steadily declining in New York City - that is, until 2012. Suddenly, accidents spiked to a level that seemed to undo whatever progress had been made. No singular cause appeared to be responsible for this increase, but official reports pointed to a few factors that were primarily responsible for recent auto accidents, including:

As one may expect, the rise of accidents in New York is due to drivers’ negligence. Despite recent initiatives to promote safe driving habits, the road still holds a tangible risk of injury or worse.

Among the many reasons one might want to eschew driving in New York City, safety can certainly play a role in the decision. However, pedestrians and bicyclists compose the majority of traffic deaths every year. In 2011, there were 142 pedestrian deaths in the city, or nearly 60 percent of all traffic fatalities. This number has only risen in recent years, to 152 in 2012 and 156 in 2013.

Across the state, the numbers more than double. In 2012, 357 pedestrians and bicyclists were killed from a total of 21,969 pedestrian/bicyclist traffic accidents. 98 percent of these accidents resulted in reported injuries.

Sadly, one of New York State’s more notable statistics is its rate of alcohol-related accidents. In 2012, 344 people were killed in the state as a result of driving under the influence, 32 of whom were under the age of 21. These deaths account for roughly 30 percent of all traffic deaths in the state, indicating just how dangerous DUI is and the sort of problem it presents for New York residents. Moreover, in most of these accidents, testing showed a significant blood alcohol content (BAC) in at least one of the drivers, proving that intoxication was not merely incidental, but a direct factor of the accidents. Worse yet, about half of the drivers in these fatal crashes were repeat offenders of DUI, showing a clear disregard for both the law and their own dangerous history.

Have You Been Injured in an Accident?

A car accident can leave you with considerable property damage, personal injury, and in some cases, the loss of a loved one. Don’t let the resulting financial obligations continue to impact your life; let an experienced New York attorney help you gain compensation from the negligent driver. Contact Gary A. Zucker & Associates, P.C. to learn how we can help you receive the compensation you deserve.